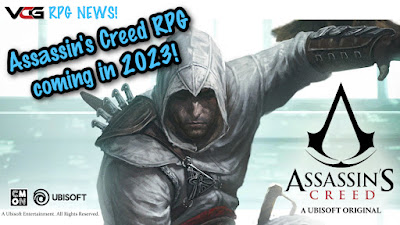 Assassin's Creed RPG was just announced from CMON Games in collaboration with Ubisoft.

Fans of the video game can expect a deep dive into a wealth of lore and history pulled directly from the series' core line, as well as the over two dozen spin-off games. Assassin’s Creed and roleplaying fans can expect a deluxe set of the books, along with numerous game supplements and enhancements, like character miniatures, detailed maps, and game aids. Preorders will be starting in 2023. You can see the announcement here: https://cmon.com/news/cmon-set-to-adapt-ubisoft-s-assassin-s-creed-for-tabletop-rpg
Posted by Doug Shute at 4:06 AM