Here is a look at our GraniteCon@Home schedule: 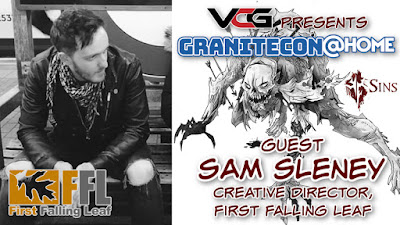 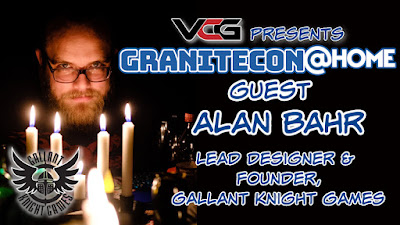 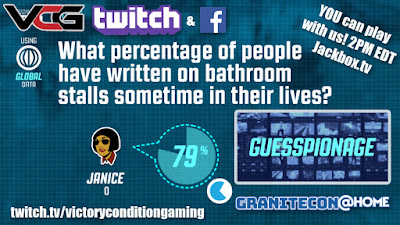 2PM EDT on VCG's Twitch and FB page - LIVE! Guesspionage - play against US!
Are you good at guessing stats? Do you think you could out guess some of the VCGers? Join us for GUESSPIONAGE during GraniteCon@Home! You can play against us at Jackbox.tv on your mobile device!
The premise of Guesspionage is quite simple: Guess the percentage (From 0% to 100%) of people who answered yes, or no, to a specific survey question. The closer the player is to the correct percentage, the more points they gain. The other players can also guess if the guessed percentage is higher or lower than the true percentage to gain points themselves, even not during their turn.
You can watch and participate on VCG's Twitch and Facebook. 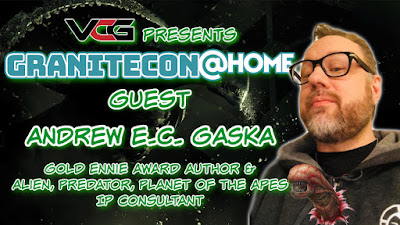 4PM EDT on VCG on VCG's Youtube - '"Hello, MU/TH/ER. It's me, Drew.":A Q&A with Andrew E.C. Gaska
Join us on Victory Condition Gaming's Youtube channel for a GraniteCon@Home panel with Andrew E.C. Gaska. Gaska is the
gold Ennie and UKGE Award-winning settings and adventure writer for the ALIEN Role Playing Game, Drew is a creative director, designer, and sci-fi author with twenty years of industry experience. He is a freelance consultant to 20th Century Fox, maintaining continuity and canon bibles for Alien, Predator, and Planet of the Apes. For seventeen years he consulted for Rockstar Games on titles such as Grand Theft Auto and Red Dead Redemption. Drew has written two Planet of the Apes novels and is also the Senior Development Editor for Lion Forge Animation. He lives beneath a pile of action figures with his glutenous feline, Adrien.
You can watch this session HERE. 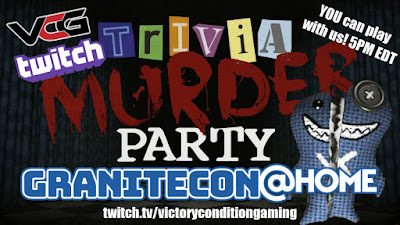 5PM EDT on VCG's Twitch and FB page - LIVE! Trivia Murder Party - play against US!
Do you think you can outsmart some of the VCG regulars? Do you love trivia? Take us on in Trivia Murder Party! All you need is to tune in and go to http://jackbox.tv on your mobile device!
Trivia Murder Party starts off with up to 8 players, all living and ready to die. First, they have to answer a question. While in most games all of the questions are complicated trivia, on occasion there have been memory puzzles with 4 answers to a question regarding a photo. If you get a question wrong, you are sent to the Killing Floor, and must fight for your life in a randomly selected minigame. If you lose the minigame, you die. However, ghosts are still able to win the game through the final round.
You can watch and participate on VCG's Twitch and Facebook. 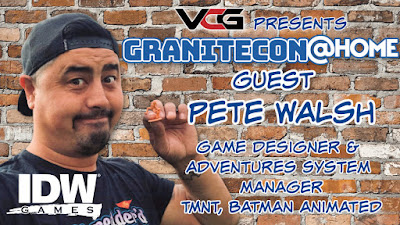 6PM on VCG's Youtube -"Cowabunga, Shellheads!":A Q&A with Pete Walsh, IDW Games
Join us on Victory Condition Gaming's Youtube channel for GraniteCon@Home to hear how this super fan turned game designer and what projects he has in the works for IDW Games. Pete Walsh is a totally bodacious game designer for IDW Games. After two extremely successful Kickstarter campaigns that pulled in over $2.4 million in funding, he now works with popular IPs - Teenage Mutant Ninja Turtles and Batman:The Animated Series as the Adventures System Manager.
You can watch this session HERE. 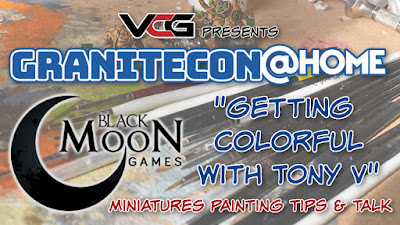 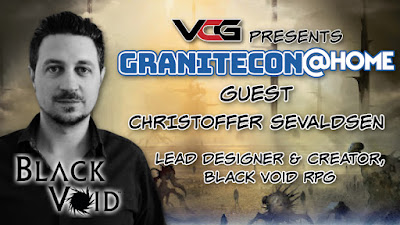 9PM on VCG's Youtube - "Into the Void":A Q&A with Christoffer Sevaldsen, Black Void RPG
Christoffer Sevaldsen has been creating stories, building worlds, playing and GM'ing role-playing games since he was 10 years old; first with the older kids in school and later in multiple groups, in ASA institutions, participating in RPG/gaming-cons across Denmark and the United Arab Emirates.
He is a former marketing director, musician, logo/brand designer and holds a B.A. in philosophy and a M.A. in communication.
The BLACK VOID RPG is his full-time occupation and his remaining waking hours are split between dreaming up new games and his family of three boys.
Check out this session HERE.
All of the GraniteCon@Home Youtube content will be available for viewing after the live sessions.
Thank you to Granite State Comicon for letting us be a part of their virtual event this year.
If you would like to learn more about Granite State Comicon, New Hampshire's finest comic convention since 2003, check out Granitecon.com.
Make sure to like, follow and subscribe to Victory Condition Gaming on Youtube, Twitch, Facebook and Instagram.